My key idea is that scientists create conceptual models as tools to explain what happens in nature.  These models include objects and interactions within a system.  The objects and interactions can be represented with words, equations, graphs, diagrams, and images (2D and 3D).  All models have limitations since no single model explains all things in nature.  We must choose the appropriate model to explain each specific situation.

The idea of models is critical in science because models are the lens through which we see nature.  Students will see how scientists analyze evidence to support or refute a model.  Students also need to know that models can be revised and scientific knowledge is subject to change with new evidence or new theories.  (Recently I have been introduced to the idea that theories sometimes precede evidence because the theory determines what type of evidence you collect.)

The methods for developing students' ability for model development and deployment  start with an observable phenomena.  Phenomena that are large and highly visible are more engaging and stickier.

In the first unit, the phenomena will be bowling ball pendulum attached to the ceiling tends to engage students because the mass of the bowling ball can lead to huge collisions and damage.  In the constant acceleration unit  I will attach multiple one meter tracks together to create a large two meter track for demonstrations at the front of the class.  For the balanced forces unit, the phenomena will include a sequence of visualizations to show that tables apply a normal force like a spring would.   Also, we will use force plates to push each other around on a chair with wheels to demonstrate that the forces are balanced despite mass and a net force that is not equal to zero.  There is also a demonstration that includes a photovoltaic cell, a laser, and a speaker to show that a table changes shape at a microscopic level when you put a bowling ball on the table.

Summative Assessments
Students are assessed at the end of each unit with a 1) group lab practicum and 2) individual exam. Both will be open notes.  In the lab practicum, students will be presented with a new physical setup in which they will have to create and apply the model to predict an unknown physical quantity.  Students have 1 attempt and are graded based on the accuracy of their predictive model.  For the individual exam, students are given several new word problems to assess students' ability to apply the model.

As an alternative, students may create videos as their summative assessment. The video must include a physical representation that can be described by the models in the unit.  The video must also include all the visual representations of the model (words, equations, graphs, and diagrams).  The video must include a narration explaining the physical situation and representations.
Formative Assessments
The main formative assessment is the whiteboard discussions we will have in class to discuss lab results and the problem sets.   The whiteboard discussions will incorporate the six facets of understanding from Wiggins and McTighe.  Students will have to interpret and explain their data, graphs, diagrams, and mathematical models.

Mathematical Model (equation for linear fit)
Is the line a good fit? 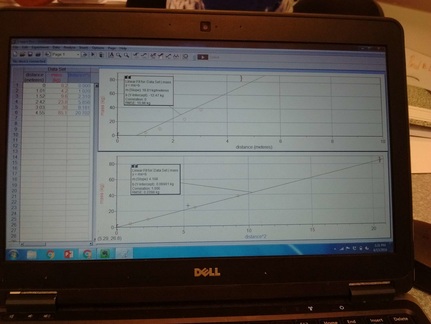 Students' will also be assessed on their ability to collaborate and reflect on their collaboration.  Students will complete a google form  to reflect on each whole-class discussion.  Questions will include:
For formative assessments, students will take "standard checks" which are connected to a list of standards for the unit.  Most standard checks will be in the form of digital or paper quizzes.  Students will receive their standard checks back and record their scores on a "standard mastery tracker".  Students can retake standards and track their growth.  Standards will include content, experimental skills, and collaboration skills.  ​​

Context
I will be teaching four sections of Physics to freshmen.  Class sizes are around 32 students each.  Another teacher will be teaching one or two of the extra sections of Physics.  Our student population is roughly 30% African American, 30% Latino, 30% Caucasian, and 10% other.  Roughly half of our freshmen come from our 8th grade class and the other half enter through the IB application process from all over the city.  I see our students 5 times a week for 50 minutes.  I have a chromebook cart (33) that I received from DonorsChoose.org last year.

In addition to learning the key models in physics, students will learn about the process of developing, deploying, and revising models.  Scientists develop models through systematic data collection and deploy the model to predict or describe similar systems.  After testing the model in different situations, scientists note the limitations of a model or revise the model with new information.  Another key aspect of the process of modeling is the collaborative discussion in interpreting data and building consensus.

Pedagogy
The pedagogies included in each unit are phenomena-based guided inquiry, whole-class whiteboard discussions, small-group procedures, and reflective journaling.  The beginning of each unit will begin with an engaging visual phenomena.  The phenomena can be a live demonstration, video, or virtual reality experience.  The teacher will help narrow down variables and students will receive a purpose for each lab.  The format will be "to mathematically and graphically model the relationship between _________ and _________."  Students will use sensors and computer software to collect experimental data.  Students will discuss their results and write a graph, equation, and explanation on their whiteboard.  After coming to a consensus within their lab group, the students come to a consensus with the entire class about the meaning of their results.

At the beginning of the year, students will complete a reflective google form for each discussion.  Students will reflect on how their ideas were confirmed or challenged in the discussion and how they can make the next discussion more effective.

Technology is crucial for the data collection and analysis.  Additionally, students can project their data wirelessly onto the projector with Google Cast for whole-class discussions.  My students will use Vernier software to collect data and interpret the data in google sheets on chromebooks.  Google sheets allows students to create linear fits on their data and create calculated columns for manipulating their data.  I will have to explore other cloud-based software such as plotly and desmos for more advanced data analysis (error bars, root-mean squared, standard deviations, nonlinear fits)

Whiteboards are also a form of technology for quickly visualizing data and solutions to word problems.  Students can take pictures of the whiteboards with the OfficeLens App on their phone because the app calibrates for the glare from the whiteboards.  The pictures can be archived on Google classroom for future student reference.  Another piece of technology that will help with the discussions is test tube racks hung from the ceiling so that students will put away their markers during discussions so that they are paying attention.  The test tube racks will make it easy to see which groups are completed by a quick scan of the room.

Google Cast will make it quick and easy to broadcast live data collection from a student's laptop to a projector.  Google Forms allows for a digital reflection of their collaboration.  Students can keep track of their progress throughout the year.   I am also interested in using Kahoot and the Breakoutedu puzzles for quiz review. I will use google quizzes or Flubaroo to automatically grade quizzes to assess basic skills such as vocabulary and arithmetic.

During the "model deployment phase" of the unit, students will be required to tweet out a picture or video of an example of models from the current unit.  For example, students could tweet video of a situation where "all forces on an object are balanced".  Students can also produce advanced 3-D models with glowscript.org, VR applications, or augmented reality applications. ​